One Sunday in November 2014 wheelchair bound 12 year old Naomi Arinze from Lagos attended services both at St Michaels and All Souls churches (Fig 1) with her aunt who lived in Camberley. She suffered from a condition called Blount’s disease in the bones below her knees which had resulted in severely bent painful legs and her not walking for the past 6 years after a failed operation to straighten both of them in Nigeria in 2008. 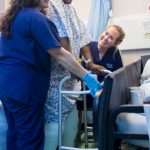 Her Aunt Mercy had read about a girl called Gloria Abeku from Ghana with a similar problem who had undergone successful surgery in Southampton General Hospital in 2012. She managed to contact me to ask for help for her niece. Unfortunately the surgeon involved had moved to Lincoln so she was seen by another in Bristol. Naomi was overweight and much less mobile than Gloria so potential surgery and recovery were likely to be much more challenging and expensive. Before any treatment plan could be devised Naomi had to go back to Nigeria as her visa was about to expire.

Two years later the Mercy Ship returned to West Africa after serving the people of Madagascar while avoiding the risk posed by the terrible ebola epidemic in Guinea, Sierra Leone and Liberia. Naomi lived in Lagos only about four hour’s drive from the Port City of Cotonou in Benin where the ship was docked. I arranged for her to be seen by American orthopaedic surgeon, Dr Frank Haydon, who has operated on over 400 children in Africa with the same condition. On November 18th 2016 he did a five hour operation which involved breaking, re-positioning and plating both of Naomi’s legs below the knee. She was up on her feet with a frame and nursing support four days after surgery (Fig 2) and walked for the first time with no support about six weeks later. Her plasters were removed on board the ship after three months – the photo shows her with the Africa Mercy in the background. (Fig 3) 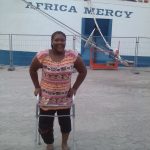 Thanks to the remarkable treatment, love and care which Naomi received on board the Mercy Ship she will soon be able to return to her school in Lagos and begin again a life which has been ‘on hold’ for so many years.

This is my editorial, blog or column. Call it what you will, but this is the place to read about how I have been helping people in need.